We have had our dog Suzy for almost three years, yet never had the opportunity to take her on a road trip. Besides going to the vet she was only in the car on one other occasion to see how she would do, and she threw up that time. My sister called on Sunday Sept 13th to let me know that my Dad was not able to move and was taken to the ER by ambulance. They found that he had an infection, gave him some antibiotics and released him. The next day my step mother ended up getting him back to the ER because he was much worse and he was admitted to the hospital. By the evening of the 14th things were not looking good and my husband and I decided that we had better 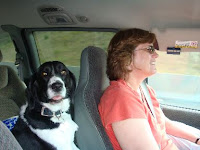 head up to be with him.

On Tuesday I bought a harness for Suzy to keep her safe in the seat. My husband Don tried to get her fitted and ready for the trip and she would have nothing to do with it. He tried to talk me out of taking her, but I just couldn’t leave her at home when I didn’t know how long we were going to be gone. I told him I would give her herbs and she would be fine. So very early on the 16th I gave her a Ginger capsule for the nausea and a Relax-Eze capsule for the hyperness. I could not believe how great she was, usually she would jump from seat to seat, but most of the trip she just slept on the floor, occasionally looking out the window. The trip took 12 1/2 hours to get there due to traffic problems and was a joy the whole way.

We ended up staying until the morning of the 26th, my Dad was released to a Rehabilitation Center on the 23rd which amazed me because I really thought he wasn’t going to make it. During most of our time in Washington we worked on fixing up his house so that it can be sold and move into something smaller. We worked very hard for about 12 hours a day and all I can say is thank goodness for Kava Kava. Both my husband and I have issues with our back & neck when we overwork. We took the Kava Kava at night and woke up in the morning with no stiff muscles. We also added Spirulina to our regular herbs that we take, Spirulina is a great super 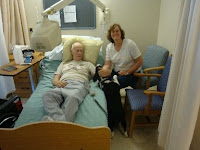 food and has always given me energy.

On the 26th we went over to the rehabilitation center to say goodbye to my Dad. Don was going to keep Suzy outside while I went in for a minute. Suzy bolted for the door and ran in, so I asked if it was ok for her to be there and they said yes. We ran her down to my Dad’s room and he was quite happy to see her. On the way out I remembered that I had forgotten to give Suzy her herbs. They had some food on trays, so I put a small amount of scrambled eggs into a napkin to put the capsules in. She would not eat them, Don sniffed the eggs and said they smelled powdered. I went back into the center and got a packet of margarine and dipped the capsules in that. Suzy still would have nothing to do with it, she knows real butter from the imitation. Don ended up pushing them down her throat and holding her mouth closed until she swallowed. We headed back to Utah. Suzy was a bit hyper for about 15 minutes until the capsules took effect and was again docile for the entire trip. 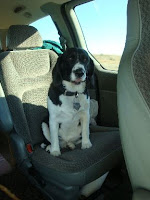 I have had sinus and breathing problems for years due to allergies. At springtime last year we got these nasal cleansing pots in and after seeing them used on Oprah, Ellen and Good Morning America. They are also called Neti-pots and have been used for years by people living in other countries. I got one for myself and my husband and I started using it and was impressed. My husband held back for a few weeks and then finally gave it a try and he is faithful at using it now. We both love how much better our sinus' are doing and mine were doing so good that I stopped using it for awhile, and then noticed that I was having problems again, so now I am determined to use it faithfully morning and night. This is a simple inexpensive thing that people can do and well worth the effort. I use a little scoop of salt and fill up the pot and do one side, blow my nose, and then the other side. Takes about two minutes and is simple and easy enough that a child could do it. Buy a separate pot for each person, the plastic ones will last a long long time. Happy Breathing!!!!
Posted by Kathryn at 2:28 PM No comments: Links to this post

We went to a family reunion over the weekend, I usually sign up to bring a dessert so that there is a treat I feel good about eating. After eating lunch I was walking over to talk to two of my cousins who were discussing a piece of cake that they eaten. As I walked up they asked me if that was my Zucchini cake that they had eaten. I said yes, and they said we knew it was yours, it looked so healthy and tasted so good, and they knew because it had coconut in it. They had both gone over to get another piece but it was all gone. It is a bread recipe that I had baked it in a 9 x 13 inch cake pan and took a bottle of whipped cream to use for the topping. I hope you enjoy it too.
Zucchini Bread
Mix together:
3 eggs
1 cup butter, I use 1/2 c butter 1/2 cup coconut oil
1/2 cup plain yogurt
1 1/2 cups raw honey or 2 cups organic sugar
1 tbsp Vanilla
2 cups shredded zucchini, a little extra is ok, I just use what I have up to 3 cups
1 cup organic coconut
In a separate bowl whisk together:
3 cups whole wheat flour (I use sprouted whole wheat flour)
1 tsp. Real Salt
2 tsp baking soda
1 tsp Rumford baking powder
1 tbsp cinnamon, or a little more if you really like it
Add the dry ingredients to the wet, mix until just blended. Pour into pans. Bake at 350 degrees. Mini pans about 40 min. Regular loaf pan 45 - 50 min. 9x13 pan about 45 min.
I modified this recipe from a great cookbook I recently got called At Tiffany's Table. All the recipe's use honey as a sweetner, whole grains, wholesome recipes. I love this cookbook!
Posted by Kathryn at 9:17 AM No comments: Links to this post 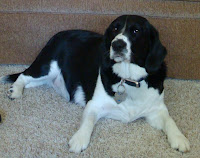 I love my pets and have been talking for years about treating them successfully with herbs. The other night we had some guests over for dinner and one of them is on seizure medicine. He accidently dropped a pill on the floor and before he could even bend down to pick it up our dog Suzy gulped it down. I called poison control and they told me the signs to look for but didn't know what it would do to a dog. I happened to have some Activated Charcoal in my cupboard, so I dipped one in butter and Suzy gulped it down as well. She seemed a bit hyper before we went to bed but settled down and in the morning thankfully was still with us. Activated charcoal is estimated to reduce absorption of poisonous substances up to 60%, and works by adsorbing chemicals, through the entire length of the stomach and small and large intestines (GI tract). I'm happy that I had it on hand to give at the moment that it was needed.
We sell this and other great herbs at Herbs First. You can order Activated Charcoal on our Nature's Way Favorites page.
Posted by Kathryn at 9:25 AM No comments: Links to this post

Kathryn
I grew up using Comfrey as the cure all herb in my family and learned how to make Comfrey extract from my Mom. When I got married I found that going to the doctor often didn’t bring solutions, so I started learning about herbs and their usage. I fell in love with Dr. Christopher’s line of herbs when I was able to overcome Rheumatoid Arthritis. Being entrepreneurial at heart, my husband Don and I were the first to offer the Dr. Christopher products on the internet in 1997 via our Herbs First website. I consider myself a lifetime student, because I am always learning about natural healing. We were able to add the Western Botanicals products to the website in 2005 and have found them to be very complementary to the Christopher product line. In answering people’s questions on the website, I felt that a blog is the perfect way to share this knowledge with others. I am not able to diagnose or prescribe, but am happy to share my experiences to help people learn how to take care of themselves.

Promote Your Page Too